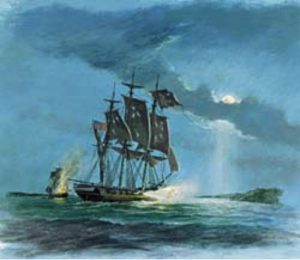 The United States Daughters of 1812,  founded in 1892, is a volunteer women’s service organization dedicated to promoting patriotism, preserving and increasing knowledge of the history of the American people by the preservation of documents and relics, marking of historic spots, recording of family histories and traditions, celebration of patriotic anniversaries, teaching and emphasizing the heroic deeds of the civil, military, and naval life of those who molded this Government between the close of the American Revolution and the close of the War of 1812, to urge Congress to compile and publish authentic records of men in civil, military, and naval service from 1784 to 1815 inclusive, and to maintain at National Headquarters in Washington D.C., a museum and library of memorabilia of the 1784-1815 period.

– Named in honor of the ship U.S.S. Louisiana – 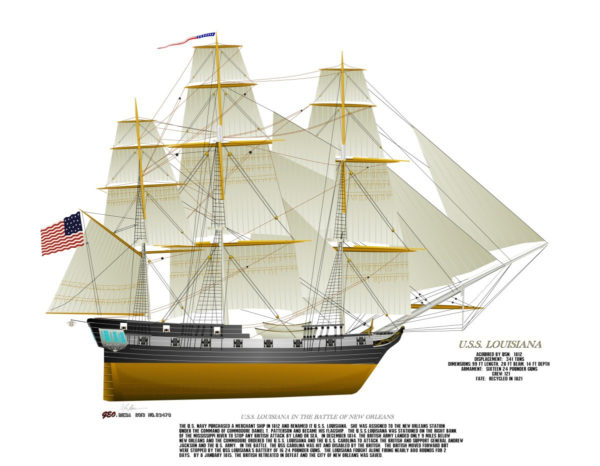 During the War of 1812, the U.S.S. Louisiana almost single-handedly saved her home port of New Orleans.

The Navy purchased the U.S.S. Louisiana in September 1812, and immediately attached her to the New Orleans station.  She was originally built as a merchant sloop at a cost of $15,500 for service on the Mississippi River.  The U.S.S. Louisiana displaced 341 tons and rated sixteen 24-pounder long guns.  She measured only ninety-nine feet, six inches on the deck, her beam was twenty-eight feet, and she had a fourteen-foot-deep hold.  She remained unarmed for the first two years of the war.

In August 1814, she received her guns and fittings in anticipation of her role as Commodore Daniel T. Patterson’s flagship.

The heaviest and most powerfully armed ship in Capt. Patterson’s flotilla, the U.S.S. Louisiana served as a floating battery, stationed on the right bank of the Mississippi River, ready to cover any possible British attack by land or sea.  From the 23rd of December 1814 to the 8th of January 1815, the sloop U.S.S. Louisiana pounded advancing British troops.  On the 23rd of December 1814, the British army landed only nine miles below New Orleans, and Commodore Patterson ordered the U.S.S. Louisiana and the U.S.S. Carolina to attack down river to provide much needed naval gunfire support of General Jackson’s troops.

After disabling the U.S.S. Carolina with hot shot and setting her afire, the British moved forward on the 28th of December, but the heavy battery of the U.S.S. Louisiana forced them back after she fired nearly eight-hundred rounds.  Fighting alone, she dropped farther downriver on the 30th and continued inflicting damage on the British Army.  When British troops advanced upriver beyond the range of her deadly cannon fire, the crew of the Louisiana did not let the absence of wind deter its support.  In order to re-engage the enemy, crew members waded ashore with mooring lines and towed their sloop upriver against the currents of the Mississippi River.  We honor the memory of those undeterred men who resolutely towed their ship upstream to engage the British and did it while wading in the cold muck and mire of the Mississippi River banks, amidst swift currents.

By sunset on the 8th of January 1815, the British, thoroughly defeated, retreated, and New Orleans was saved.  That evening a grateful General Jackson paid tribute to the heroic aid from the U.S.S. Louisiana and her captain and crew.  The U.S.S. Louisiana under Capt. Patterson’s brilliant command was credited with playing a key role in the defeat of the British and saving the valuable port of New Orleans by keeping it in American hands.

Some of the preceeding U.S.S. Louisiana history was found at www.history.navy.mil/research/histories/ship-histories/danfs/l/louisiana-i.html. 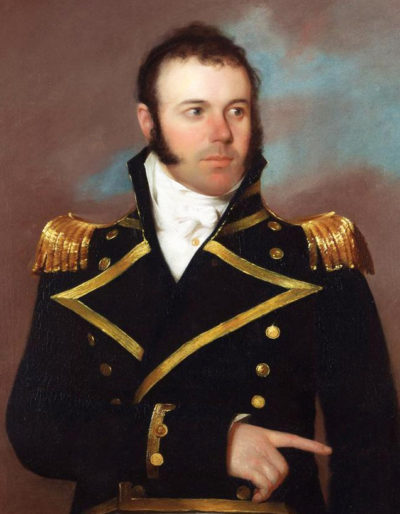 An oil on canvas, three-quarter portrait of Commodore Daniel Todd Patterson (1786-1839), an American Naval Officer, was a hero from the Battle of New Orleans, the final conflict of the War of 1812.

During the decisive battles of December 1814 and January 1815, Patterson was Commodore of the flotilla supporting General Andrew Jackson.  Posed against a threatening sky (or perhaps one filled with the smoke of battle), the youthful, masculine Patterson is pictured making a traditional gesture of command.  The portrait is brightened by a white cravat and pearl stickpin.

On February 28, 1815, he was promoted to Captain, and his portrait was probably commissioned shortly thereafter.  His naval career brought him to Norfolk in 1824.  His portraitist, John Wesley Jarvis, painted a steady stream of naval officers from the same war, men who shared credit with Andrew Jackson for the last major victory of the War of 1812.  The painting is owned by the Chrysler Museum of Art, Norfolk, Virginia.

The Chrysler Museum of Art  provided the above information.