The Thomas H. Flippin Chapter meets the third Saturday in January, May, and September.  Meeting places vary but cover the area of northwest Arkansas.  Please send an email to the Chapter President for more information.

Who was Thomas H. Flippin?

Thomas H. Flippin was born in 1793 in Barren County, Kentucky to Thomas Flippin, a Revolutionary War Patriot, and Rhoda McAdoo Flippin. His father received multiple land grants, which resulted in the family moving between Kentucky and Tennessee. Thomas H. Flippin, along with 4 of his brothers were Volunteers in the Kentucky Mounted Militia during the War of 1812.

During the War of 1812, under the command of General Hopkins and Captain Hugh Brown, the troops were ordered to go to the relief of Fort Harrison that was besieged by the Indians. One evening a high wind was blowing when the Indians started fire to the prairie. The soldiers cut the grass with their knives and set fire to the grass behind them. They then marched on the burnt ground barely in time to save themselves from the roaring sea of fire that was approaching. Many of the horses were stampeded, which resulted in the troops having to walk to Ft. Harrison. Upon arrival they were nearly starved, being eleven days out with three days rations.

At the end of the War of 1812, Thomas H. Flippin married Elizabeth Baugh on 29 November 1816 in Barren County, Kentucky. They had two sons, William Baugh Flippin and Thomas Haggard Perry Flippin.

They relocated to Monroe County, Tennessee, where Thomas H. Flippin applied with the courts to file a document to begin a township named Flippin, Tennessee.

Thomas H. Flippin was a prosperous member of the community. He was the Marion County Clerk and very involved in the Church. He applied for land grants related to the War of 1812.

Thomas H. Flippin was a true patriot to the freedom of the United States of America. Many past and future generations have continued the fight for freedom. 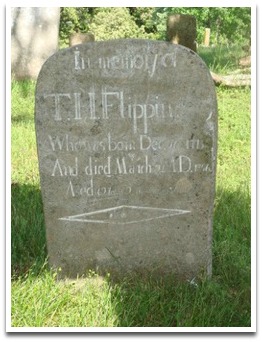