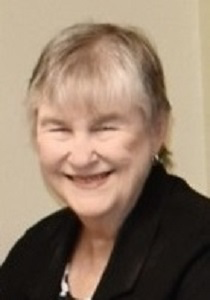 President Liddie Henderson (seated in center) is surrounded by some of her officers and members
at her first meeting to preside on September 21, 2022.
Karen Hall presented a program on “The Star-Spangled Banner.”
The Constitution Week Proclamation from the City of Conroe’s mayor was displayed,
as well as the upcoming Veterans Day Proclamation since our next meeting
follows the date of November 11, 2022.
Seated (L-R):  Sue Hereford, Karen Hall, President Liddie, Lady Dalton, Mollie Weber
Standing (L-R):  Pat Spackey, Judy Weidner, Carolyn Collmorgen, Gail Utley, Lisa Harvey, Sally Morello, & Eugenia Letbetter

THOMAS BAY was born 28 January 1793, in Davidson County, Tennessee, near Nashville. He was the son of Andrew Bay, Revolutionary Soldier, and his wife, Elizabeth. He moved with his parents to Wilson County, TN before 1802.

He was almost twenty years old when he volunteered for the War of 1812 on December 11, 1813, for a term of sixty days. He served as a corporal, commanded by Capt. John Hill, in the Regiment of Mounted Volunteers, commanded by Col. Higgins, in the war declared against Great Britain on June 18, 1812.

On January 2, 1815, he married Mary (Polly) Eddings in Wilson County, TN. She was the daughter of William Eddings, Revolutionary Soldier, and his wife, Rebecca Chandler. Four children were born before the Thomas Bay family moved to Haywood County, TN near Memphis. Five more children were born and raised in a community named Goshen.

In 1850, Thomas and Mary Bay, their children and their families, moved to Montgomery County, Texas. They came by wagon train, the trip taking three months, arriving around Christmas time. They bought several thousand acres of land in the J. H. Collard Survey in the northeastern-most part of Montgomery County. Walker and Grimes Counties bordered their property. They built their homes of hewn logs and in 1851 they had also built a church of logs that also served as a school. The church was called Bay’s Chapel Methodist Episcopal Church and School. The Bay family donated the land and the logs for the church as well as labor.

On Jun 15, 1852, Thomas Bay’s granddaughter, Mary Frances Williamson, age 6, died. Thomas Bay donated an acre of land for a cemetery about a mile from the church.

On February 14, 1861, Thomas Bay died and is buried in Bay’s Chapel Cemetery. His wife, Mary, and many of his descendants are also buried there.

Many of Thomas Bay’s descendants still live on Bay’s Chapel Road and in adjoining counties. A very large crowd returns to Bay’s Chapel on the fourth Sunday in August each year for the homecoming. There are church services and singing all day in the church house and “dinner” on tables under the trees much like they did 100 years ago.

Three sons served in the Confederate States Army. All were farmers to the third generation. All of Thomas Bay’s descendants portray loyalty to their county, community and home. They have been a credit to Montgomery County and I think it is fitting for a new chapter of U. S. D. 1812 to be named for Thomas Bay.

The Chapter was named for the ancestor of members Jewel Wilson Powers Kirkham, her daughter Deborah Powers Bentley, and 1st cousin Barbara Wilson Morgan. Thomas Bay served in the War of 1812. Afterwards, he married Mary Eddings in Tennessee and in 1850, the family moved to Montgomery County, Texas. Their property was in the northeastern part of the county and besides building their home they also built a church named the Bay’s Chapel Methodist Episcopal Church and School. Near the church is Bay’s Chapel Cemetery, donated by Thomas, where he and his family are buried. The Church and Cemetery are located off Hwy. 149, north of Montgomery, about two (2) miles outside of Richards, on Bay Chapel Road. Services are still held in the church twice a month, and the cemetery is in continuous use and kept up by family members of the deceased who are buried there.

The Purpose of the Society is to promote patriotism; to preserve and increase knowledge of the history of the American people by the preservation of documents and relics, the marking of historic spots, the recording of family histories and traditions, the celebration of patriotic anniversaries, teaching and emphasizing the heroic deeds of the civil, military, and naval life of those who molded this government between the close of the American Revolution and the close of the War of 1812; to urge Congress to compile and publish authentic records of men in civil, military and naval service from 1784 to 1815, inclusive; and to maintain, at the National Headquarters, a Museum and Library of Memorabilia of the 1784-1815 periods.

Our Chapter is proud to have had many of our members serve the Texas Society as State Officers through the years. Karen Hall and Carol Hicks are both Honorary Texas State Presidents. We also have many members who have served as Texas Society State Chairmen and a few who have served as National Chairmen. Many of our members have been presented The Spirit of 1812 Award through the years for their outstanding service to USD1812 and their community. Karen Hall has also served on the National Board as Registrar General.

Some of the projects Chapter members have participated in through the last thirty-five (35) years are supporting the Veterans, presenting many JROTC medals to qualified cadets in Montgomery, North Harris, & Liberty County, donating books to National, Public and School Libraries, supporting all the National and State projects with their donations.

Our membership has varied through the years from nineteen (19) to the current sixty-seven (67) members including twelve (12) young Junior members. Being located North of Houston, our members are from the surrounding Counties of Montgomery, Grimes, Walker, Liberty, and North Harris. Several members live out of the area, but still in Texas, with a few members living out of State. We welcome anyone interested in USD1812 in our area to contact us for more information. 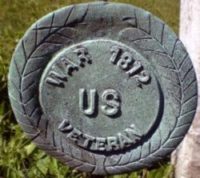 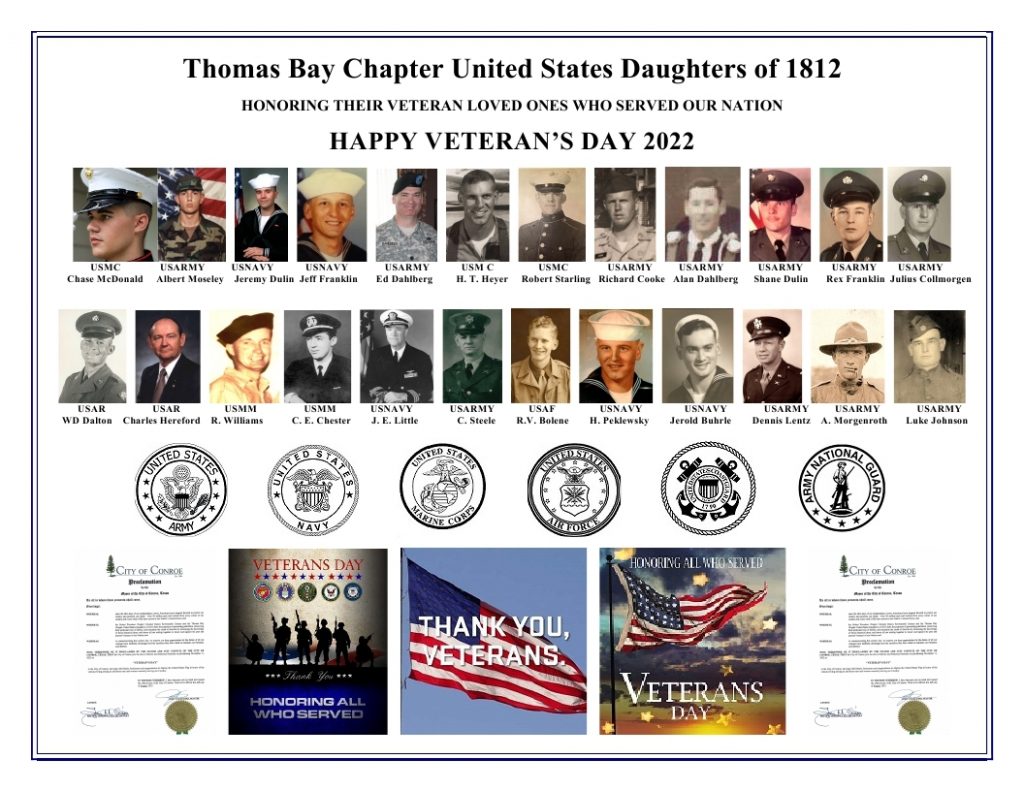 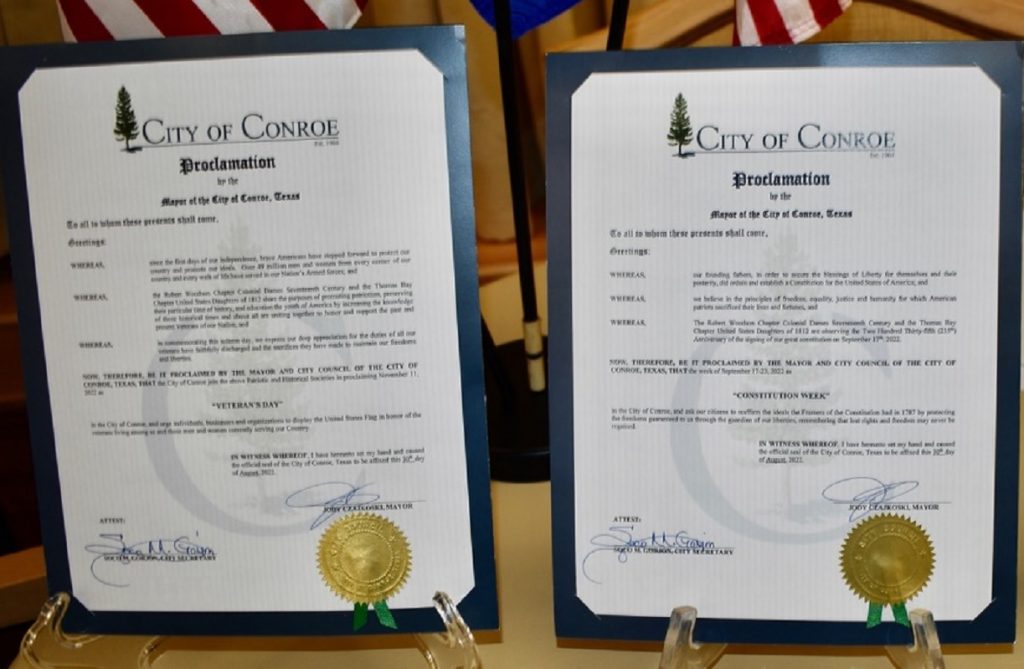 The Thomas Bay Chapter Newsletter was one way we kept in contact with our members during COVID-19 that also had a short program for their enjoyment about the 1812 era.

We’ve actually had the newsletter much longer, but found it is very useful for those members who are unable to attend due to health or too far for them to come to the meetings.

Our chapter membership is made up of quite a lot of family members with many living all over Texas and a few out of state. 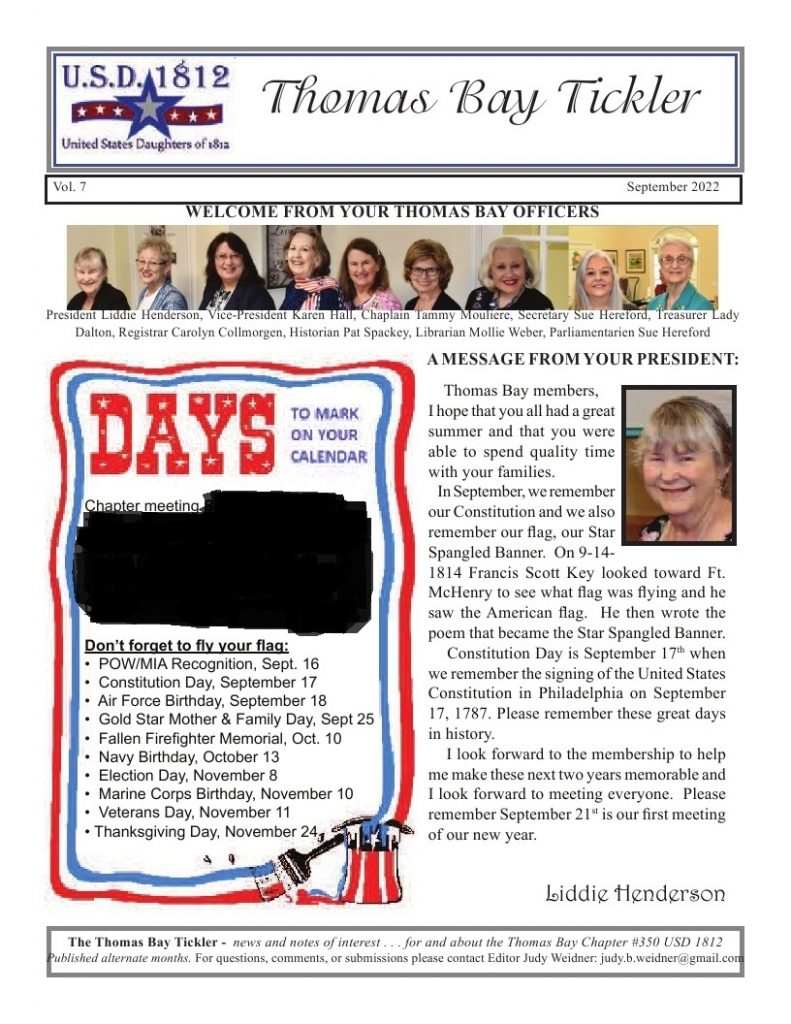