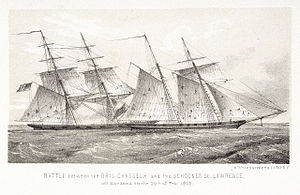 The Chasseur is named in honor of the Baltimore clipper ship, Chasseur that was built in 1812 in Fells Point, Maryland by Thomas Kemp.  The Chasseur was instrumental in capturing many British ships during the War of 1812.  In fact, in 1814, Captain Thomas Boyle declared that the British Isles were under a naval blockade by the Chasseur alone.  The Chasseur was later nicknamed the Pride of Baltimore by the newspaper, the Niles Register.