Simon Bradford Chapter was organized September 19, 1911, in Pine Bluff, AR.  Meetings are held four times a year on the third Wednesday in February, May, August and October at the Pine Bluff Country Club.  For over 100 years, the Chapter has served the community, as well as marked and dedicated the graves of patriots of the War of 1812.

Arkansas Navy Silver
The story of Navy silver is very rich.  Naval silver has been a part of the British armed forces since the 18th century.  In the late 1890’s American battleships which were traditionally named after states, inspired the citizens of some states to take up collections to commission silver services for presentation to its namesake battleships.  Contributors ranged from the captains of commerce and political leaders to school children donating pennies.  Well-known silver makers were called upon to design and craft the silver services including Tiffany (USS Indiana), Gorham (USS Saratoga), Shreve (USS California), Reed & Barton (USS Arizona) and Kirk (USS Maryland).  During wartime, silver services were typically removed from their ships and placed into Navy storage to be returned when ships came safely home. 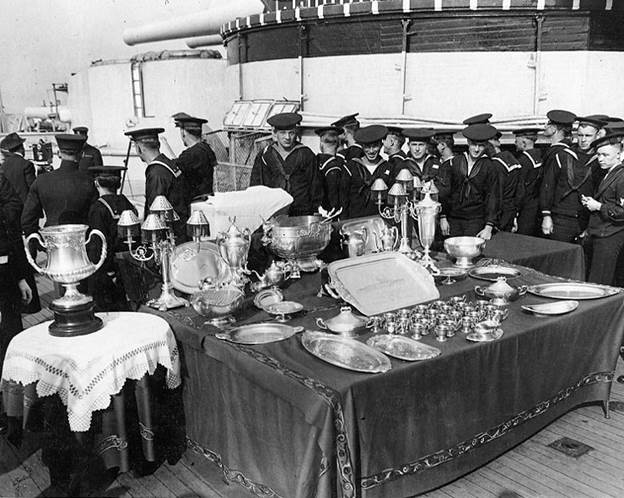 The battleship USS Arkansas (BB-33)[Above picture]  Crewmen examining the silver service presented to the Battleship USS Arkansas by the State of Arkansas.  Daisy Dalony [U.S.D. 1812] made the presentation on behalf of Arkansas governor Charles H. Brough on April 23, 1919.  Arkansas womens’ and lineage groups, including U.S.D. 1812, provided the silver set.  The set is currently on display and used at the Governor’s Mansion. 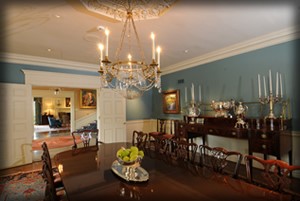 ”A Chippendale-style cabinet also was acquired by Mrs. Bumpers and houses part of the impressive 62-piece silver set purchased by the people of Arkansas and given to the Battleship U.S.S. Arkansas in 1919.  The silver was returned to the State after the battleship was decommissioned in 1946.”

“Madam President and Members of the First State Conference, U.S.D. 1812, in Arkansas:

The Simon Bradford Chapter, U.S.D. 1812, was organized in September, 1911, with ten charter members.

During the past two years we have added eight new names to our roster, but we mourn the loss of one of our charter members, Mrs. Allie Lee Fox Edgar.

In 1912 we offered a prize of five dollars in gold for the best essay on “The Battle of New Orleans,” written by a member of the seventh grade.  This was won by Miss Pauline Bennitt.

We have located the grave of a soldier of 1812, the ancestor of several of our members, Dexter Harding, one of the early settlers of Pine Bluff who is buried in Bellwood Cemetery.  A marker has been applied for.

In May, 1913, Simon Bradford Chapter presented a silver vase suitably inscribed, to the Battleship USS Arkansas, for use on the captain’s table [emphasis added].  We also contributed several books to the battleship library.