Return to State of Georgia

The National Society United States Daughters of 1812 was organized on January 8, 1892, on the anniversary of the Battle of New Orleans. For more than a century, the members of the National Society United States Daughters of 1812, have dedicated themselves to promote patriotism, to preserve and increase knowledge of the history of the American people, by preserving documents and relics, marking historic spots, recording family histories and traditions, celebrating patriotic anniversaries, teaching and emphasizing the heroic deeds of the civil, military and naval life of those who molded this government between the close of the American Revolution and the close of the War of 1812, from 1784 to 1815, inclusive, and to maintain, at National Headquarters in Washington, DC a museum and library of memorabilia of the 1784-1815 period. 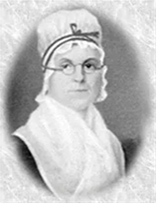 Sarah Porter Hillhouse was the daughter of General Elisha and Sarah Jewitt Porter of Hadley, MA born the 29th of April 1763. She married David Hillhouse, the fourth child of the Honorable William and Sarah Griswold Hill­house. David was born the 11th of May 1756 in Montville, CT and they married the 7th of October 1781. David was a graduate of Yale and was an Officer in the Revolutionary War while Sarah attended the finishing school learning academics as well as the skills of entertaining and hospitality.

The Hillhouses set out for Georgia along with several of their New Eng­land friends and David’s sister and her husband, Mr. and Mrs. William Prince all trying to escape the terrible winters they had endured. The Hillhouse families left their children in New England to go to school and learn their manners. When arriving in Washington, Wilkes County, GA David, a businessman, built a commissary fort guarded by the military to keep sup­plies from being stolen. The Hillhouses established a general store and warehouses to sell and store sugar, rum and molasses from Barbados or the West Indies, flour, salt fish and hams from New England, rifles, pistols, ammunition, knives, axes, spades and plows from overseas, and casks of wine for the planter’s sideboard. All were landed in Savannah, Darien or some other port and from there transported slowly to the up country. Da­vid purchased the “Washington Gazette” a local newspaper, changed the name to “The Monitor” and he and Sarah learned to print newspapers, ad­vertisements, notices, and printed the first Lottery Tickets for school build­ing and teaching supplies in 1803.

David died 16 years after coming to Georgia and 2 years after purchasing the newspaper. With her husband now deceased and being four months pregnant Sarah had a huge decision to make, either make the most of what they started in Georgia or pack up and move 1100 miles back to New Eng­land. After her time of grieving, she picked up the pen, made a list, sent letters to all their business and social friends, and never looked back. She proved to be an adept editor and publisher to serve the area with news from far and near. A shrewd and even aggressive businesswoman, Sarah established a side business selling blank paper, legal forms and books while managing a newspaper, maintaining a household and leading eco­nomic growth. She is credited with building the first three frame houses in town. She printed the first Georgia Legislative Records and is described by many as the First Woman Editor and Publisher in Georgia and perhaps in the United States. Sometime around 1812 she turned the newspaper over to her son David Porter Hillhouse. The descendants of this family remain proud today of the service and patriotism exhibited and taught in the fron­tier of a new country. Her home is still standing and marked by an Historic Marker in front. The home is currently owned by the Slaton Family and is open on special occasions for tours.

In the Fall of 2019. Georgia State President Sharon Sowders approached Linda Easterwood about the need for a chapter in the Rome area. After thought and consideration, Linda took up the challenge.

Email invitations were sent to various lineage society members an­nouncing an Organizational meeting to be held on January 4th, 2020, at Sam’s Burger Deli in their Veterans Room. This room was totally lined with 8×10 photos of local Veterans who have had a meal at Sam’s. We had 16 prospective chapter members present. The meeting was officiated by then State President Sharon Sowders.  Prospective member Eliz­abeth Chapman served as Chaplain and Maggie Oyler as Recording Secretary. A nominating committee was selected, chapter dues were discussed and a request for 3 potential chapter names to be present­ed at our next meeting. It was decided that our chapter would meet twice annually once chartered.

Our Bylaws were approved on April 20, 2020, for adoption at the future Chartering Meeting. The name of our Chapter was approved during the National Board of Management Meeting held Oct 11. 2020 and our Charter meeting was held on November 1, 2020.