Return to State of Virginia

Chapter meeting dates are the Fourth Saturday of the specified month unless otherwise notified.

James Monroe (1758-1831), the fifth President of the United States, began the construction of Oak Hill, his Loudoun County home in Aldie, Virginia between 1820 and 1823.  He lived here following his presidency until 1830, the year before he died.  For the design of Oak Hill, Monroe sought ideas from both Thomas Jefferson and James Hoban, architect of the White House.  The house was constructed by local builder William Benton, Its dominant architectural feature is the unusual pentastyle portico.  It was here that Monroe drafted the Monroe Doctrine, a policy aimed to limit European expansion into the Western Hemisphere and assign the United States the role of protector of independent Western nations. 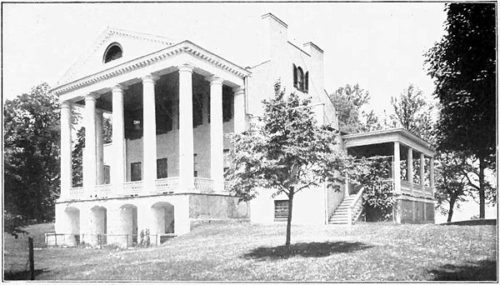 Oak Hill was sold after the death of James Monroe.  It is a private residence and has increased in size.  It is a designated National Historic Landmark and a monument to the last of the “Virginia Dynasty” of presidents.