Purposes:
National Society United States Daughters of 1812, founded in 1892, is a volunteer women’s service organization dedicated to promoting patriotism, preserving and increasing knowledge of the history of the American people by the preservation of documents and relics, marking of historic spots, recording of family histories and traditions, celebration of patriotic anniversaries, teaching and emphasizing the heroic deeds of the civil, military, and naval life of those who molded this Government between the close of the American Revolution and the close of the War of 1812, to urge Congress to compile and publish authentic records of men in civil, military, and naval service from 1784 to 1815 inclusive, and to maintain at National Headquarters In Washington D.C., a museum and library of memorabilia of the 1784-1815 period. 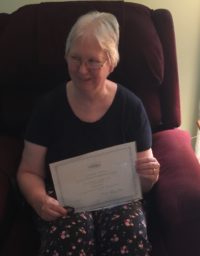 Kay Kye, a member of the Commissioner Charles Gause Chapter, received the “Military Service Award” from National. This award was presented August 1, 2015, at the NCSU Faculty Club in Raleigh, NC.  Chapter President, Betsy Hardison Hamer, accepted the award for Kay and presented it to her at her home in Winnabow, Brunswick County, NC.