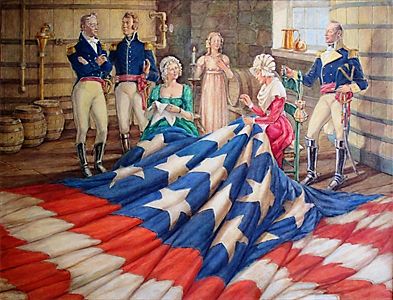 The Mary Young Pickersgill Chapter was organized in Towson, Maryland on February 16, 1978 with 13 members.  The Organizing President was Mrs. Ralph C. Kemp.  On April 10, Mrs. Kemp proudly accepted the Chapter Charter from the President National at the National Council luncheon and meeting held at the Mayflower Hotel in Washington, D.C.

During the first year, meetings were held at the historic Valley Inn in Brooklandville, Maryland, and at the historic Flag House, the home of Mary Young Pickersgill, namesake for the chapter. Mary Young Pickersgill was responsible for sewing the “Star Spangled Banner” flag that flew over Fort McHenry during the British invasion of the War of 1812. It was this flag that inspired Francis Scott Key to write a poem that became our National Anthem. During the first year of the new chapter, a ceremony was held commemorating the restoration of the gravesite of Mary Young Pickersgill who is buried along with her mother, Rebecca Young, at the Loudon Park Cemetery in Baltimore.