General John Floyd Chapter meets
the fourth Thursday in September
and March; and the second
Thursday in December. 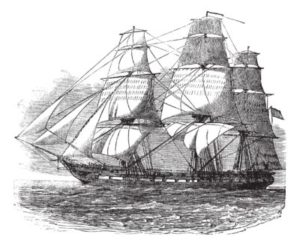 The United States Daughters of 1812,  founded in 1892, is a volunteer women’s service organization dedicated to promoting patriotism, preserving and increasing knowledge of the history of the American people by the preservation of documents and relics, marking of historic spots, recording of family histories and traditions, celebration of patriotic anniversaries, teaching and emphasizing the heroic deeds of the civil, military, and naval life of those who molded this Government between the close of the American Revolution and the close of the War of 1812, to urge Congress to compile and publish authentic records of men in civil, military, and naval service from 1784 to 1815 inclusive, and to maintain at National Headquarters In Washington D.C., a museum and library of memorabilia of the 1784-1815 period.

On June 28, 1901, the Georgia Society was organized with Miss Virginia Arnold as President. The following year, on May 5, 1902, General John Floyd Chapter No. 3, Atlanta, Georgia, was chartered. Miss Arnold was the Organizing President and first Chapter President, followed by Miss Nina Harnady who held the office from 1909 until 1927, the year that the chapter first presented a medal to an outstanding midshipman in the Naval ROTC Unit at the Georgia Institute of Technology. This annual tradition continues to the present.  For over a century the chapter has followed the example of the organizing members by providing leadership, promoting growth in membership and striving to fulfill the purpose of the National Society.

The organizing members chose an honorable name for the new chapter. John Floyd was born in South Carolina, where he became a carpenter. With his wife, Isabella Marie Hazzard, and his parents, he moved to Georgia, where his carpentry skills were used in building Fairfield, his plantation home, Bellevue, a home for his father, and in building boats. During the War of 1812 he commanded Georgia troops, serving as Brigadier General in the First (Floyd’s) Brigade of the Georgia Militia, leading expeditions against the Indians along Georgia’s western frontier. He later served in the Georgia House of Representatives. In 1832, he was honored to have Floyd County named for him. He died on June 24, 1839, and is buried in the Floyd Cemetery in Camden County, Georgia. 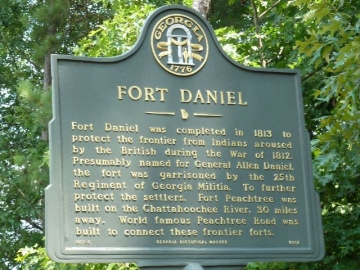 Fort Daniel, located in Gwinnett County, was one of a chain of small forts constructed during the War of 1812 to protect the frontier from Indian attacks instigated by the British. Our knowledge of the fort and this period is growing as archaeologists work with the public to excavate this important military site. 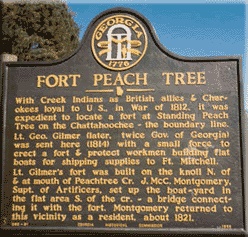 The history of Fort Peach Tree begins with the War of 1812. The Chattahoochee River was the frontier between the Creek and Cherokee Indian nations and a standing peach tree was a major contact point for both Indians and white traders.