The National Society United States Daughters of 1812 was organized on January 8, 1892, on the anniversary of the Battle of New Orleans. The primary purposes of the Society are to promote patriotism, to preserve and increase knowledge of the history of the American people, by preserving documents and relics, marking historic spots, recording family histories and traditions, celebrating patriotic anniversaries, teaching and emphasizing the heroic deeds of the civil, military and naval life of those who molded this government between the close of the American Revolution and the close of the War of 1812, from 1784 to 1815, inclusive, and to maintain, at National Headquarters in Washington, DC a museum and library of memorabilia of the 1784-1815 period.

The General John Clarke Chapter #393, United States Daughters of the War of 1812, was organized at Roswell, Georgia, on 23 July 1998 by Organizing President Jean Cole Manker (Mrs. David Steffner). Membership increased from 17 organizing members to 21 members by December 1998, the date the Chapter was chartered. 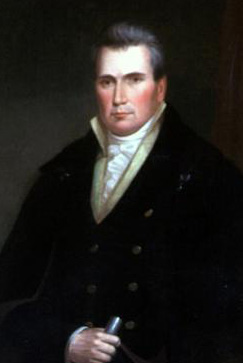 John Clarke served as a Major General in the Georgia Militia; and served as Governor of Georgia from 1819 to 1823.  The eldest son of Elijah Clarke and Hannah Arrington Clarke, John was born on Feb. 28, 1766, in Edgecombe County, North Carolina. He moved to Georgia with his family by 1774 to the northeastern portion of Georgia later known as Wilkes County.

With few educational resources in Georgia for their son, Elijah and Hannah sent John to North Carolina to continue his education. It was while John was in North Carolina that his father’s involvement grew in the Revolutionary War. John left school to join his father’s patriot militia unit who were fighting the Tories. He fought at several engagements, including battles at Kettle Creek, Augusta, and Musgrove Mill in South Carolina. By the age of 16, John was appointed Captain in the Georgia Militia.

After the Revolutionary War, John remained active in the Georgia Militia and was promoted to Major General by 1796. During his service in the militia, the Georgia frontier was still very dangerous, and he spent much of his time protecting frontier settlements. Under the command of his father, he helped the Georgia Militia achieve a militia victory in 1787 over the Creek Indians at Jack’s Creek in present-day Walton County.

During the War of 1812, John commanded the Georgia troops along the Georgia coast. To his credit, settlements along Georgia’s coast did not suffer the losses of other East Coast cities and towns.

John served in the Georgia House of Representatives and the Georgia State Senate as well as serving as the sheriff of Wilkes County. He was chosen by the Georgia Legislature to serve as Governor of Georgia in 1819 until 1823. While he was Governor, the Creek Indian Treaty was signed in 1821.

In 1827, John moved to western Florida with his wife, Nancy Williamson Clarke, daughter of Micajah Williamson. While living at St. Andrews, Florida, John served as an agent of the federal government. He died on Oct. 12, 1832 at the age of 66 in Florida of yellow fever, a disease that also claimed his wife.

Originally interred at St. Andrews Bay, John was re-interred along with his wife and two grandchildren at the Marietta National Cemetery, Marietta, GA in April 1923.

Clarkesville, Georgia is named for John Clarke. He was known as a rugged individualist and was considered fearless by all who knew him.