Our Motto
“Liberty, Fraternity, and Unity”

Chapter Meetings
Francis Scott Key Chapter meets on the second Monday in the months of June and October.  We typically meet in Pasadena. 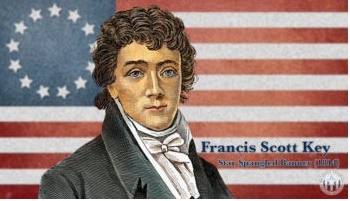 The National Society United States Daughters of 1812 (N.S.U.S.D. of 1812) is a non-profit, women’s organization based in Washington, D.C., dedicated to serving the “fraternal interests [of] women whose lineal ancestors served in the civil government, the army or the navy of the United States” between 1784 and 1815.

Francis Scott Key Chapter was named after Francis Scott Key, born August 1, 1779; died January 11, 1843.  He was an American lawyer, author, and amateur poet from Frederick, Maryland, who is best known for writing the lyrics for the American National Anthem, “The Star-Spangled Banner.”  Key observed the British bombardment of Fort McHenry in 1814 during the War of 1812.

Return to the States & Chapters of U.S.D. 1812
Francis Scott Key Chapter Members Only