The U.S.D. of 1812, founded in 1892, is a volunteer women’s service organization dedicated to promoting patriotism, preserving and increasing knowledge of the history of the American people by the preservation of documents and relics, marking of historic spots, recording of family histories and traditions, celebration of patriotic anniversaries, teaching and emphasizing the heroic deeds of the civil, military, and naval life of those who molded this Government between the close of the American Revolution and the close of the War of 1812, to urge Congress to compile and publish authentic records of men in civil, military, and naval service from 1784 to 1815 inclusive, and to maintain at National Headquarters In Washington D.C., a museum and library of memorabilia of the 1784-1815 period. 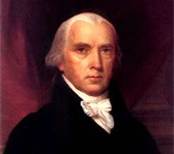 During the invasion of Washington, at Bladensburg, the American forces suffered from mismanagement in the placement of troops and a lack of leadership, despite the presence of President Madison and Secretary of State Monroe. The British troops crossed the river under heavy fire, causing the first two American lines to retreat. A third line including Barney’s flotillamen and a contingent of U.S. Marines, fought courageously until they too, were forced to flee leaving the wounded Barney on the field of battle as per his orders.

This opened the way for the British to continue on Bladensburg Road to Maryland Avenue into Washington on the evening of August 24, 1814. There the British burned the Capitol and then marched up Pennsylvania Avenue and burned the White House. Along the way they burned many other government buildings including some at the Washington Navy Yard.