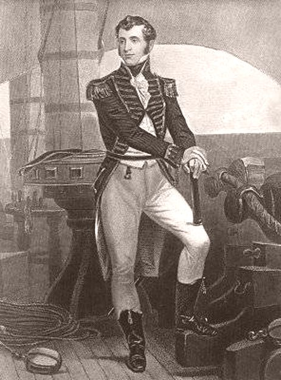 Our chapter was organized on December 12, 2020 by Organizing President Sarah Meyers.

Stephen Decatur was born January 5, 1779 and quickly rose to prominence in his naval career.    The history of Stephen’s daring exploits reads like that of a modern- day action hero – he was definitely an adventurer and a hero.  By the age of 25 Stephen Decatur was a captain; thus, making him the youngest person to attain that rank in the long and storied history of the United States Navy.   Stephen was also the first American celebrated as a hero that had not played a part in the American Revolution.

His career began pre 1812 during the first Barbary War, which takes us back to 1804.  Stephen led a mission to recapture and if necessary, destroy the USS Philadelphia.   He and a group of his men went in disguise as Maltese sailors.  They hid aboard a frigate named the Intrepid which was moored up against the Philadelphia in Tripoli harbor.  He and his men snuck aboard and recaptured the American Ship.   It was decided that the Philadelphia was not seaworthy.  They set it afire and while it burned Stephen and his men made their escape.

The now Captain Decatur’s exploits did not stop there and he continued to rise in battle.  In 1812, the British Navy was larger not only in ships and equipment, but in manpower as well.   The United States Navy did not let these facts deter them.   Captain Stephen Decatur captured the frigate HMS Macedonia while he was the commander of the U.S.S. United States.

During his short career he won numerous victories against Britain, France and the Barbary states.  He was a hero during his lifetime.  However, Stephen Decatur’s distinguished career in the Navy ended tragically.   On Mary 21, 1820 this courageous young man was killed in a duel with a disgraced Navy Commodore James Barron at Bladensburg, Maryland.