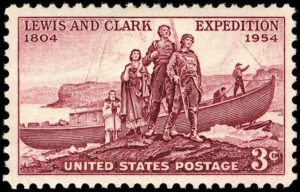 Founded by Flora Adams Darling on January 8, 1892
Incorporated in 1901, by an Act of Congress
For more than a century, the members of the National Society United States Daughters of 1812, have dedicated themselves to patriotism, preservation of documents and relics, and education.

Eligibility:  The United States Daughters of 1812 is a non-profit, women’s organization based in Washington, D.C., dedicated to serving the “fraternal interests [of] women whose lineal ancestors served in the civil government, the army or the navy of the United States” between 1784 and 1815.

Chapter Namesake Brigadier General William Clark (August 1, 1770 – September 1, 1838) was an American explorer, soldier, Indian agent, and territorial governor.  A native of Virginia, he grew up in pre-statehood Kentucky before later settling in what became the state of Missouri.  Clark was a planter and slaveholder.

Along with Meriwether Lewis, Clark helped lead the Lewis and Clark Expedition of 1804 to 1806 across the Louisiana Purchase to the Pacific Ocean and claimed the Pacific Northwest for the United States.  Before the expedition, he served in a militia and the United States Army.  Afterward, he served in a militia and as governor of the Missouri Territory.  From 1822 until his death in 1838, he served as Superintendent of Indian Affairs.